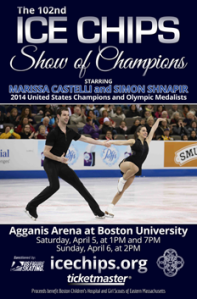 Kate and the skaters at the Skating Club of Boston (SCOB) have been working hard the past few months in preparation for the Ice Chips Show of Champions on April 5 & 6.

As a member of the show’s creative team, Kate is co-choreographing all group numbers for the performance.

If you’re in the Boston area, don’t miss this amazing show! It’s offered:

View all posts by mcswainstarrett